Create an Account - Increase your productivity, customize your experience, and engage in information you care about.

On December 10, voters of Roeland Park will have the opportunity to decide on a proposed 0.35% sales tax increase. This proposed tax is to help replace the lost revenue from the upcoming departure of Wal-Mart. Sales tax is generated from consumers who live both inside and outside Roeland Park.

During the 2014 budget process the City Council received feedback through a citizen survey and two town hall events that residents wanted to see a balanced approach to the budget. From that feedback, the City Council proposed a combination of spending cuts, a property tax increase and a sales tax increase to solve the challenges that will arise when Wal-Mart indicated they will relocate in 2015.

Starting in 2014 new cuts of $132,250 in City services will include eliminating the purchase of one police vehicle, not filling the soon to be vacant Deputy Chief of Police position, and reducing the community events budget.

Proposed Use of Sales Tax Funds

The Governing Body at its November 4th Council meeting approved a non-binding Resolution (630) which sets out how the City intends to use the funds if approved by the voters. The priority of how the funds are proposed to be used, is as follows: 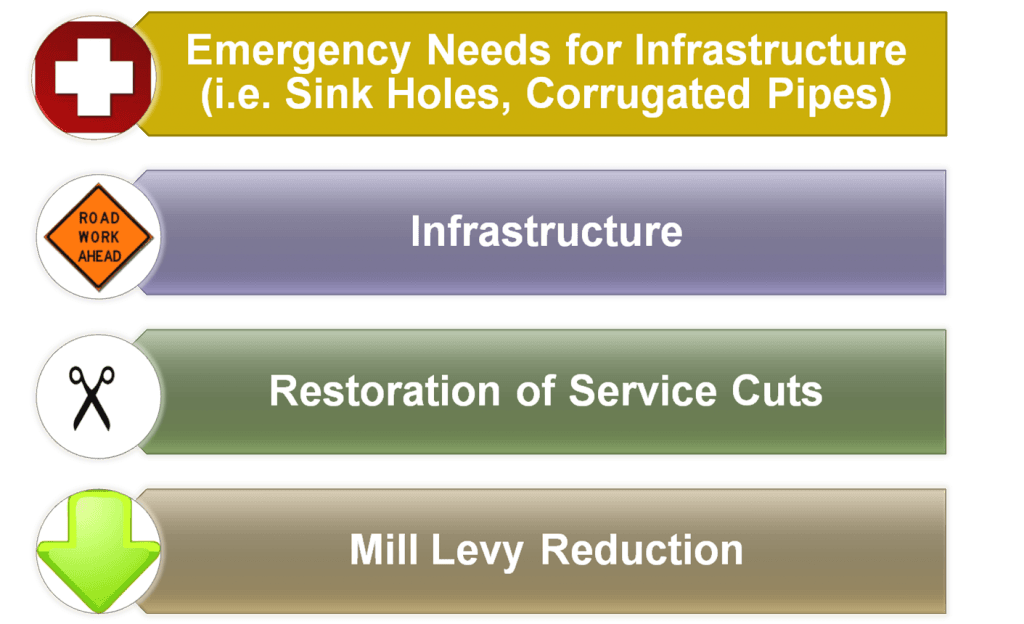 The first use of sales tax dollars will be used to address unexpected infrastructure repair and replacement needs, such as: Corrugated Stormwater Pipe Repairs which are estimated to cost between $665,000-$960,000. It is estimated that after Wal-Mart's departure, the sales tax will collect approximately $288,000 a year for up to 5 years.

Resolutions adopted by the City Council are often used as way to express an opinion. Resolution 630 is not binding on current or future Councils; however, it does contain the intended uses for the sales tax funds as seen by the same City Council members who authorized the issue to be on the ballot.

The exact mail ballot language is as follows:

Ballots will be mailed to electors by Johnson County Election Office on November 18.